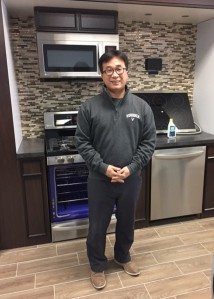 Edward Kim is good at multitasking. That’s evident by the way he runs his appliance showroom.

On a cold January day, Kim is busy filling in for a store manager who’s on vacation. He doesn’t miss a beat as he waits on customers and answers the phone during an interview about Buying Together, the business he founded at age 40.

Buying Together, located in Annandale, Virginia, sells refrigerators, dishwashers, washers and dryers, ovens, televisions and other merchandise mostly to Korean customers in the surrounding community. The 2,200- square-foot showroom packs an assortment of brands, including Maytag, GE, Amana, KitchenAid and Bosch, to name a few.

“If I had started at age 30, I could not have survived,” says Kim, now 52. “I had no experience or connections. And connections are very important, especially in this business.”

The path to entrepreneurship hasn’t been easy for Kim, who grew up in South Korea and studied history and economics in college. In 1990, he joined LG Electronics where he spent eleven years in marketing. Over the years, most of his family relocated to the United States.

In 2002, he moved to U.S. to be with his family and to help his sister grow her delicatessen. When the deli expansion didn’t happen, Kim found work with a food company that serviced military bases. The company went bankrupt, leaving Kim without a job.

He began researching business ideas in part because the independence that comes with entrepreneurship appealed to him. “I wanted to do my own planning and make my own decisions,” he says.

Kim’s original plan was to arrange for group purchases so his customers could “buy together” and receive a discounted price. “The concept didn’t work because it took several days for the products to ship – and people wanted them quickly,” he says. “But I kept the Buying Together name anyway.”

When Buying Together opened in 2004, it had to start as an online business since Kim had no credit or money for a brick-and-mortar showroom. Unable to obtain bank financing, he borrowed $40,000 from a pool of money provided by the local Korean community. The loan, which he repaid in two years, allowed him to open a showroom in Centreville, Virginia six months later. He moved the business to Annandale in 2009.

Two other factors helped Kim launch his business. One was his attendance at trade shows while he was a LG Electronics employee, which gave him in-depth knowledge about consumer buying preferences (he now sends his own employees to shows for this reason).

Another was a former boss who pointed him towards the NECO Alliance, an appliance buying cooperative. The alliance provided a mentor who visited Buying Together’s showroom and offered advice. “He always said, ‘reach out when you need help,’” recalls Kim.

Buying Together opened at a time when housing construction was booming in the U.S., fueling a need for household appliances. As a result, the company’s annual sales more than quadrupled between year one and year two. In 2005, he opened a second location in Rockville, Maryland.

Then came the mortgage meltdown in 2007-08. As home construction dried up, so did Buying Together’s business, forcing Kim to close the Rockville location and lay off 10 of his 13 employees.

“I didn’t have a Plan B when business shrunk,” said Kim. It was a painful experience that taught him an important lesson.

Realizing he needed to diversify, Kim became a county government contractor in 2009. Three years passed before a Loudoun County agency finally awarded a contract to Buying Together. In 2014, the company expanded into a new jurisdiction when it won a contract with a District of Columbia agency. About 30% of Buying Together’s annual revenue now comes from government contracting.

Kim has ambitious plans for his business. In 2017, he’s opening two new locations in the Washington, D.C. area – one in Ellicott City, Maryland next month and another in Centreville, Virginia by mid-summer. He also wants to open Buying Together franchises in Richmond and Virginia Beach by year-end and another independent location in Dallas, Texas during 2018.

Entrepreneurship runs in Kim’s family. His wife has a cosmetics business. He has three children, including a college-age son who wants to own a business and may join Buying Together after he graduates.

Kim works seven days a week and doesn’t get to bed until midnight. It’s a grueling schedule that doesn’t allow much time for the history books he enjoys reading. Still, he “strongly recommends” entrepreneurship as a second career.

“I heard about a Ph.D. who lost his job the other day,” he says. “Nobody guarantees you a job anymore.”

His advice for aspiring entrepreneurs?  “Start small but act big,” he says. Keep your housing expenses low, do your homework, know your market and acquire the knowledge you need.

Most importantly, don’t give up if your dream is to own a business.

Note:  The Korean edition of “Late-Blooming Entrepreneurs: Eight Principles for Starting a Business After Age 40” is now available. For more info, please visit the “Book-Korean Edition” page on this site.

I'm a freelance writer who helps organizations and individuals meet their marketing and communications goals. I am also the author of "Late-Blooming Entrepreneurs: Eight Principles for Starting a Business After Age 40." To learn more, please visit my website: lynnebeverlystrang.com.
View all posts by Lynne Strang →
This entry was posted in Business, Career Changes, Careers, entrepreneurs, Entrepreneurship, Leadership, Retirement, Success and tagged Korea, Work. Bookmark the permalink.

What do you think? Cancel reply